In order to meet the challenges of Big Data, you must rethink data systems from the ground up. You will discover that some of the most basic ways people manage data in traditional systems like the relational database management system (RDBMS) is too complex for Big Data systems. The simpler, alternative approach is a new paradigm for Big Data. In this article based on chapter 1, author Nathan Marz shows you this approach he has dubbed the “lambda architecture.”

This article is based on Big Data, to be published in Fall 2012. This eBook is available through the Manning Early Access Program (MEAP). Download the eBook instantly from manning.com. All print book purchases include free digital formats (PDF, ePub and Kindle). Visit the book’s page for more information based on Big Data. This content is being reproduced here by permission from Manning Publications.

Computing arbitrary functions on an arbitrary dataset in real time is a daunting problem. There is no single tool that provides a complete solution. Instead, you have to use a variety of tools and techniques to build a complete Big Data system. The lambda architecture solves the problem of computing arbitrary functions on arbitrary data in real time by decomposing the problem into three layers: the batch layer, the serving layer, and the speed layer. 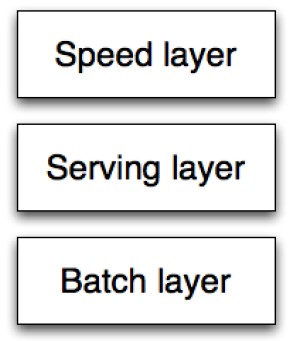 Everything starts from the “query = function(all data)” equation. Ideally, you could literally run your query functions on the fly on a complete dataset to get the results. Unfortunately, even if this were possible, it would take a huge amount of resources to do and would be unreasonably expensive. Imagine having to read a petabyte dataset every time you want to answer the query of someone’s current location.
The alternative approach is to precompute the query function. Let’s call the precomputed query function the batch view. Instead of computing the query on the fly, you read the results from the precomputed view. The precomputed view is indexed so that it can be accessed quickly with random reads. This system looks like this: 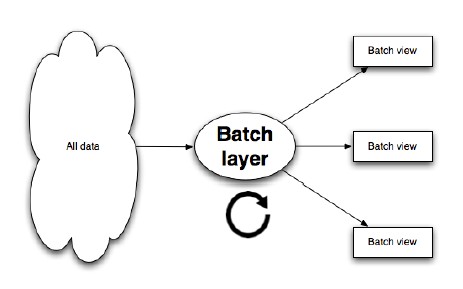 In this system, you run a function on all of the data to get the batch view. Then, when you want to know the value for a query function, you use the precomputed results to complete the query rather than scan through all of the data. The batch view enables you to get the values you need from it very quickly because it’s indexed.

Since this discussion is somewhat abstract, let’s ground it with an example.

Suppose you’re building a web analytics application and you want to query the number of pageviews for a URL on any range of days. If you were computing the query as a function of all the data, you would scan the dataset for pageviews for that URL within that time range and return the count of those results. This, of course, would be enormously expensive because you would have to look at all the pageview data for every query you do.

The batch view approach instead runs a function on all the pageviews to precompute an index from a key of [url, day] to the count of the number of pageviews for that URL for that day. Then, to resolve the query, you retrieve all of the values from that view for all of the days within that time range and sum up the counts to get the result. The precomputed view indexes the data by URL, so you can quickly retrieve all of the data points you need to complete the query.

You might be thinking that there’s something missing from this approach as described so far. Creating the batch view is clearly going to be a high latency operation because it’s running a function on all of the data you have. By the time it finishes, a lot of new data that’s not represented in the batch views will have been collected, and the queries are going to be out of date by many hours. You’re right, but let’s ignore this issue for the moment because we’ll be able to fix it. Let’s pretend that it’s okay for queries to be out of date by a few hours and continue exploring this idea of precomputing a batch view by running a function on the complete dataset. 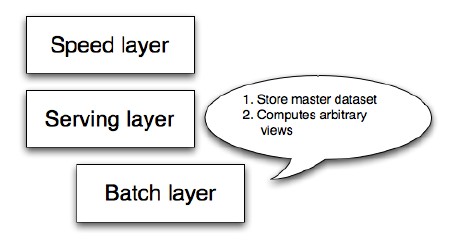 The batch layer needs to be able to do two things to do its job: store an immutable, constantly growing master dataset, and compute arbitrary functions on that dataset. The key word here is arbitrary. If you’re going to precompute views on a dataset, you need to be able to do so for any view and any dataset. There’s a class of systems called batch processing systems that are built to do exactly what the batch layer requires. They are very good at storing immutable, constantly growing datasets, and they expose computational primitives to allow you to compute arbitrary functions on those datasets. Hadoop is the canonical example of a batch processing system, and we will use Hadoop to demonstrate the concepts of the batch layer.

The simplest form of the batch layer can be represented in pseudo-code like this:
function runBatchLayer():
while(true):
recomputeBatchViews()

This code computes the number of pageviews for every URL, given an input dataset of raw pageviews. What’s interesting about this code is that all of the concurrency challenges of scheduling work, merging results, and dealing with runtime failures (such as machines going down) are done for you. Because the algorithm is written in this way, it can be automatically distributed on a MapReduce cluster, scaling to however many nodes you have available. So, if you have 10 nodes in your MapReduce cluster, the computation will finish about 10 times faster than if you only had one node! At the end of the computation, the output directory will contain a number of files with the results.

The batch layer emits batch views as the result of its functions. The next step is to load the views somewhere so that they can be queried. This is where the serving layer comes in. For example, your batch layer may precompute a batch view containing the pageview count for every [url, hour] pair. That batch view is essentially just a set of flat files though: there’s no way to quickly get the value for a particular URL out of that output. 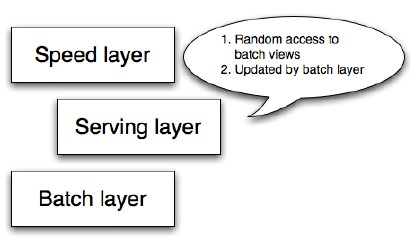 So far you’ve seen how the batch and serving layers can support arbitrary queries on an arbitrary dataset with the tradeoff that queries will be out of date by a few hours. The long update latency is due to the fact that new pieces of data take a few hours to propagate through the batch layer into the serving layer where it can be queried.

The important thing to notice is that, other than low latency updates, the batch and serving layers satisfy every property desired in a Big Data system. Let’s go through them one by one:
* Robust and fault tolerant: The batch layer handles failover when machines go down using replication and restarting computation tasks on other machines. The serving layer uses replication under the hood to ensure availability when servers go down. The batch and serving layers are also human fault tolerant, since, when a mistake is made, you can fix your algorithm or remove the bad data and recompute the views from scratch.
* Scalable—Both the batch layer and serving layers are easily scalable. They can both be implemented as fully distributed systems, whereupon scaling them is as easy as just adding new machines.
* General—The architecture described is as general as it gets. You can compute and update arbitrary views of an arbitrary dataset.
* Extensible—Adding a new view is as easy as adding a new function of the master dataset. Since the master dataset can contain arbitrary data, new types of data can be easily added. If you want to tweak a view, you don’t have to worry about supporting multiple versions of the view in the application. You can simply recompute the entire view from scratch.
* Allows ad hoc queries—The batch layer supports ad-hoc queries innately. All of the data is conveniently available in one location and you’re able to run any function you want on that data.
* Minimal maintenance—The batch and serving layers consist of very few pieces, yet they generalize arbitrarily. So, you only have to maintain a few pieces for a huge number of applications. As explained before, the serving layer databases are simple because they don’t do random writes. Since a serving layer database has so few moving parts, there’s lots less that can go wrong. As a consequence, it’s much less likely that anything will go wrong with a serving layer database, so they are easier to maintain.
* Debuggable—You will always have the inputs and outputs of computations run on the batch layer. In a traditional database, an output can replace the original input—for example, when incrementing a value. In the batch and serving layers, the input is the master dataset and the output is the views. Likewise, you have the inputs and outputs for all of the intermediate steps. Having the inputs and outputs gives you all the information you need to debug when something goes wrong.

The beauty of the batch and serving layers is that they satisfy almost all of the properties you want with a simple and easy to understand approach. There are no concurrency issues to deal with, and it scales trivially. The only property missing is low latency updates. The final layer, the speed layer, fixes this problem.

The serving layer updates whenever the batch layer finishes precomputing a batch view. This means that the only data not represented in the batch views is the data that came in while the precomputation was running. All that’s left to do to have a fully realtime data system—that is, arbitrary functions computed on arbitrary data in real time—is to compensate for those last few hours of data. This is the purpose of the speed layer. 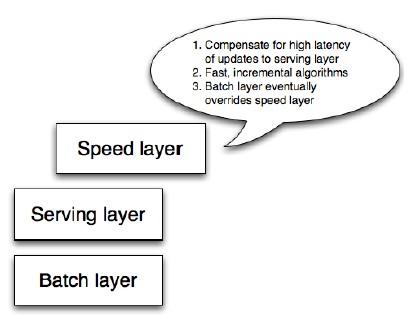 When it receives a new pageview, it increments the count for the corresponding [url, hour] in the database.

The beauty of the lambda architecture is that, once data makes it through the batch layer into the serving layer, the corresponding results in the realtime views. This means you can discard pieces of the are no longer needed realtime view as they’re no longer needed. This is a wonderful result, since the speed layer is way more complex than the batch and serving layers. This property of the lambda architecture is called complexity isolation, meaning that complexity is pushed into a layer whose results are only temporary. If anything ever goes wrong, you can discard the state for entire speed layer and everything will be back to normal within a few hours. This property greatly limits the potential negative impact of the complexity of the speed layer. 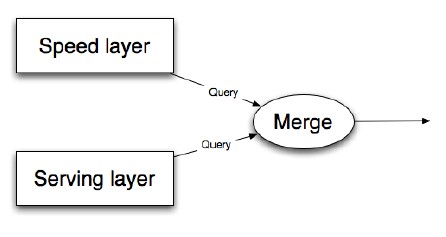 We’ve covered a lot of material in the past few sections. Let’s do a quick summary of the lambda architecture to nail down how it works.

The complete lambda architecture is represented in figure 8. 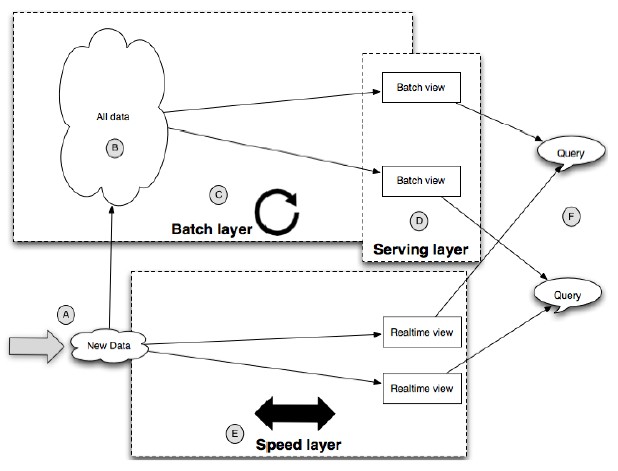